Keeping Malaysia Airlines up in the air

KHAZANAH Nasional Berhad, as the government investment arm and majority stakeholder of our cash-strapped flag carrier Malaysia Airlines Berhad (MAB), should seriously consider preventing the carrier from folding up. It would be a shame should MAB cease operations.

MAB is embarking on an urgent restructuring of its business and capital structure, of which one move entails a request for steep discounts on aircraft leasing rates from its lessors.

While the airline hopes for a positive reply from lessors, it should at the same time seriously consider trimming its current operating expenditure, like downsizing its workforce where necessary.

The outcome from lessors could depend on MAB’s restructuring plans. Downsizing would be a painful exercise. However, it would be better than continuing to bleed excessively.

Allowing MAB to fold up means the estimated 11,500 staff will have to be compensated with retrenchment benefits, which could be a more costly exercise.

Before the Covid-19 pandemic struck, the carrier already had excess staff, having axed 10 secondary destinations in China. It must be acknowledged that it was attributed to poor marketing.

The writing is on the wall that flying will never be the same again. The frills will have to be cut.

Prior to the Covid-19 pandemic, MAB had focused on the leisure and business markets.

Low-cost carriers (LCCs) have changed the landscape of the aviation industry. The Covid-19 pandemic will dilute it further.

As one who has worked closely with the civil aviation industry in the Asia-Pacific region for 32 years, I would like to say that MAB should seriously consider re-introducing Firefly’s jet operations for domestic and regional flights using its ready 737-800 fleet (pic) and pilots with the aircraft type rating before borders are opened.

The alternative is for MAB to initially operate with the 737-800 fleet. Start on a smaller scale and don’t be too ambitious. Waiting for the market to gain ground before commencing operations may be too late.

Firefly’s jet operations have potential in the domestic and regional markets. Malaysia Airlines System, which started operations on Oct 1,1972, and now MAB has been the pride of the nation. Don’t kill the carrier. Save it, even if it means with just the 737-800 fleet. 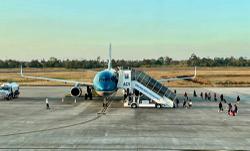