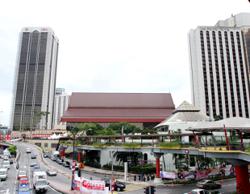 THE country is in a partial lockdown under the nationwide movement control order (MCO). The Federal Government has invoked the Prevention and Control of Infectious Diseases (PCID) Act 1988 and Police Act (PA) 1967 to come up with this order.

Under Section 5 of the PCID, the police shall assist authorised officers, be they from the National Security Council or Health Ministry, to enforce the MCO. This is where the PA comes into action.

It is important that the police are able to detain and inspect these aircraft and/or vehicles so that the authorised officers can check and see if the passengers are infected or not.

Also, under Section 26 of the PA, the police can put up roadblocks. This may be important if they need to shut off highways to prevent people from leaving certain areas.

Then there is Section 31 of the PA, which allows the police to impose a curfew requiring people to stay indoors at certain hours under certain restrictions. (This is not the case for now.)

The government has been using the PCID Act even before the MCO was implemented. Section 12 of the PCID Act prohibits a person who “knows or has reason to believe” that he has an infectious disease to expose other persons to the risk of infection by his actions or mere presence. Under Section 10, any doctor who diagnoses a patient with Covid-19 has to notify the authorities, as it is a notifiable disease. This is how we get the number of new infections every day at 5pm.

And under Sections 14 and 15 of the PCID Act, they can order an infected person or a suspected one to be placed under isolation or observation.

The most important aspect, however, is Section 31, which gives the Minister sweeping powers to shut off borders, regulate the movement of people going out, entering or even moving within Malaysia. Its provisions are very wide, including power to isolate or quarantine suspected infected people against their will, and control of the ports, airports, coastal waters and borders.

Most powerful of all is Section 31(2)(t): Such other matters as may appear to the Minister advisable for the prevention or mitigation of infectious diseases. This means any power not described in the PCID Act is also available to the Minister as long as it is for containing the disease.

Covid-19 is an infectious disease under the definition of “any other life-threatening microbial infection” in the First Schedule of the PCID Act. Sections 6 and 11 allow for the declaration of an “Infected Local Area”. These are hardcore no-go zones where the infection rate is very high (think Sungai Nipah back in the 1990s).

Under the current MCO, you can still move about and go to buy groceries, but once an area is declared an infected local area, it may be completely locked down and the inhabitants forcibly taken away for treatment and isolation. No one goes in and no one leaves.

Well, we should remember that in Article 5 (1), nobody shall be deprived of their personal liberties (such as the freedom of movement/association) save in accordance with the law – laws such as the PCID Act and Police Act.

Under Sections 24 and 25 of the PCID Act, for committing any offence under it, you may land in jail for up to two years (five for a repeat offender), or liable to a fine or to both; and in respect of a continuing offence, to an extra fine of not more than RM200 a day. If an authorised officer sees fit, an offence may be converted into a compoundable offence with a fine not exceeding RM1,000. 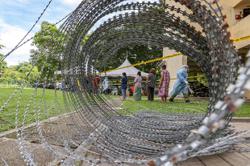