Bring back the honour to ‘Datukships’

Titles have been part of our history since the Malacca Sultanate, but it’s time to have a more stringent vetting system.

WONG Chun Wai’s article last week, “The Trouble With Titles”, was an eye-opener. He was right about the danger of Malaysia becoming a nation with the most number of titles. A valet at a hotel told me he called everyone of certain age and driving a certain car Datuk. The person will not be offended if he is not, but there some who are offended if they are not addressed as such.

The joke in London is that if you throw 10 stones among Malaysians shopping at Oxford Street, six will hit Datuks.

The Sultan of Johor, Sultan Ibrahim Ibni Almarhum Sultan Iskandar, as quoted by Wong, is even more sarcastic: he said if you throw a stone you will hit a Datuk and if it rebounds it will hit another.

Don’t get me wrong, I have no­­thing against anyone being confer­red a Datukship or whatever. I am decorated to the hilt myself. I was awarded a Federal Datukship in 1997 and a Tan Sriship 17 years later (2014). Wong, too is a Datuk Seri. I am honoured to be conferred such titles, I am sure Wong is too.

And I still believe conferring titles to deserving ones is something that should be carried on. We are like the British. But unlike them, we have many Rulers giving out the Datuk titles every year. It amounts to hundreds of them.

Perhaps we are fascinated by such titles. Perhaps it has to do with the feudal construct that we are used to. Professor Khoo Kay Kim (a Tan Sri) wrote that even with the coming of the British, there has never been a total break with the political culture since the Malacca Sultanate.

In fact, the colonial administrators encouraged it. As the istana (court) tradition dictates, within the monarchy there is a pronounced political structure. There are dignitaries in the form of court officials, most of whom were orang bergelar (literally men with titles). We are merely inheriting the feudal system that has been conferring titles since the old days.

Perhaps being conferred a title is part of the Malaysian Dream. Just being successful, having a pretty wife or driving a good car is not enough.

Titles matter. No wonder there are some who will go the extra mile to get them. Some even got them from a never-heard-of Sultanate somewhere across the sea.

Perhaps it is a passport to a higher social standing. Datukship is more than just about gelaran (title), it is also about respectability.

The media, too, is obsessed with those people with titles. The media would not report about just anyone being charged, but a Tan Sri or a Datuk being charged in court makes good copy. A Datuk marrying a young starlet is news.

When Malaysian Anti-Corruption Commission (MACC) investigates a Tan Sri, a Datuk Seri or a Datuk, many column centimetres are allocated to that. A Datuk shot dead on Penang Bridge raised a lot of questions. A particular Datuk involved in criminal activities is a hot item.

The issue here is that some of these Datuks are bringing disrepute to the title. Some are involved in activities that mar the good name of the institution that conferred them. Their conduct unbecoming is the stuff of legend.

The Malaysian Book of Records should add entries like “The Most Notorious Datuk”, “Datuk With the Most Tattoos”, “Man With the Most Datukships” and “The Youngest Datuk”.

Some 19 years ago, I highlighted this issue in my article entitled “Need For Stringent Measures To Bring Back Honour to Datukship”, published on Dec 22, 2002.

I mentioned the number of Datukships conferred by the states at the time.

I wrote about how, four months into my job as the Chief Editor of the Utusan Melayu group, I was offered a Datukship from a state.

I asked the officer who came with the news, “What have I done to deserve that?” Two years later I was offered a Datukship from another state. Again, I thought I had done nothing for that particular state.

I agree with Wong that there must be stringent measures to award titles to individuals. There must be a vetting system.

I know the Federal Government has put in place such measures. When I was the chairman of the Consultation and Prevention panel of the MACC, I was informed that someone to be considered for Tan Sriship was denied.

I suggest there must be a system of vetting involving the police and MACC. Names must be submitted to them for the go-ahead.

There are many ways to ensure a more efficient system of vetting at every level. 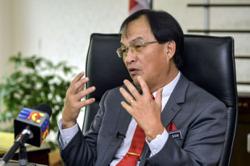