Living with the virus or endemic graft

Which is worse for the health of a nation and its citizens?

ENDEMIC. That’s the state the world is longing for, signalling the end of the Covid-19 pandemic and the truce with SARS-CoV-2 that would allow the virus and humankind to live with each other.

According to Oxfordlearners dictionaries.com, endemic is something that is “regularly found in a particular place or among a particular group of people and difficult to get rid of”.

It is often used to describe diseases common in certain countries, like Ebola is endemic to East-Central and West Africa. But it can also apply to plants and animals unique to specific habitats, like the rafflesia is endemic to Malaysia, Thailand, Indonesia and the Philippines, and koalas are endemic to Australia.

But corruption can also be endemic, and that is something Malaysians are living with; and it is beginning to make our country very sick.

As I see it, Azam has unwittingly become the face of what is perceived by ordinary folk to be seriously wrong with our country: corruption and disintegrating integrity.

For one thing, his controversy is relatively simple for the public to understand. Here is a man who holds the highest office in an organisation set up to investigate corruption in government and the private sector.

However, a whistleblower exposes his purchase of millions of shares in a company back in 2015, raising questions on this civil servant’s integrity – he lied, saying his brother bought the shares using his trading account – and his ability to afford so many shares, the amount of which has grossly exceeded the limit he is allowed.

The details of the case have been extensively reported, and it has been likened to the “playbook” of former prime minister Datuk Seri Najib Razak who tried everything in his power to wriggle out of the 1MDB scandal.

Despite his conviction on the first of several criminal cases linking him to the 1MDB scandal, Najib continues to claim his innocence. Ditto Azam who maintains he has been cleared by both the chairman of the Anti-Corruption Advisory Board, one of the five independent bodies that are supposed to monitor the MACC to ensure its integrity and professionalism, and the Securities Commission.

But the public are not willing to let him off the hook. There seems to be too many contradictions, double standards and leniency involved in how the issue has been handled thus far.

Azam’s case may pale against other controversies involving millions or billions of ringgit. But when you are the highest ranking officer tasked with graft-busting, you are expected to have the highest level of personal integrity and honesty because of the immense influence you hold, especially within the organisation.

A paper published in the European Journal of Political Economy explains why this is so:

“Endemic corruption emanates from attributes of the bureaucrat at the top of the government hierarchy (because) the top official determines the subordinates’ behaviour in the bureaucracy.”

As the saying goes: “A fish rots from the head down”, meaning if an organisation or state fails, it is the leadership that is the root cause.

The journal adds: “When corruption is so deeply rooted in society that it has become institutionalised, it can be perceived as a structural violence sustaining systems in which private interests prevail over the common good.

“This pattern erodes the fabric of society and leaves citizens disillusioned, angry at a State which is blatantly inefficient at protecting individuals and allocating resources.”

Former Kenyan prime minister Raila Odinga has an anecdote on how endemic or systemic corruption can adversely affect development. At a 2019 National Anti-Corruption Conference in his country, he regaled the audience with a tale of two ministers, one Nigerian, the other Malaysian:

The tour ended with a dinner at the Malaysian minister’s mansion, which had a swimming pool, nice sofas and dinner sets.

Impressed, the Nigerian minister then asked his host how he had managed to do so well for himself.

The Malaysian minister took the Nigerian to his balcony and showed him a highway in the distance.

“You see that highway? Ten per cent here,” said the Malaysian to indicate that a fraction of the funds used for the highway was kickback for himself.

He continued with his tale: Two years later, it was the Malaysian minister’s turn to visit his Nigerian counterpart and tour the latter’s country. But unlike Malaysia, the roads there were in terrible condition with potholes everywhere.

After the tour, the Nigerian took the Malaysian to his home for dinner.

“He found an Olympic-sized swimming pool, the sofa sets were imported from Britain, most of the chinaware were golden,” narrated Odinga.

The Malaysian asked his host how he achieved all this and was taken to the balcony.

“Do you see that highway there?” asked the Nigerian, but the Malaysian could see nothing. Instead he was told, “100% here.” And the hall howled with laughter.

I have no idea why Odinga used a Malaysian minister in his anecdote, but the really funny thing is it actually puts our country in a good light. Our minister pocketing a mere 10%? Wah liao!

Perhaps that’s how it started when our nation was young, but as we progressed with more ambitious and costly projects planned, so too the temptation and greed. We can only make educated guesses at the current percentage of kickbacks.

Corruption leads to a whole host of adverse impacts such as unqualified companies winning government contracts as a result of bribery or kickbacks. The quality of education and healthcare also deteriorates under a corrupt economy, leading to an overall lower standard of living for citizens.

For decades, Malaysians lived with increasing corruption and a diminishing integrity in many of our leaders because our country was rich enough to support it, thanks to our petroleum earnings.

But have we reached a point where endemic corruption is no longer sustainable?

Malaysians, like people around the world, have been very distracted and overwhelmed by the unprecedented Covid-19 situation, which made it a perfect cover for unscrupulous decision-makers to take advantage of.

After witnessing VIPs getting the soft treatment for SOP violations, ministers and families jetting off for overseas holidays with nary a care, and experiencing the incompetent handling of the recent severe floods, public resentment was simmering.

So when Azam Baki’s stock saga came along, the people’s blood boiled over. It became the just cause to take to the streets with young people at the forefront.

Perhaps many showed up just for the opportunity to get out and mingle and show a bit of defiance against the increasingly authoritarian thumb they had been under during the pandemic.

Whatever the reason, the anger and frustration is real across all ages and races. Malaysians are really tired of seeing people who happily assume high office and do and say stupid things. Then when they are caught in a dubious, questionable situation, they think they can get away with it. They stonewall, deny, and show no remorse, accountability or embarrassment at all.

That’s why people power is on the rise again, because while we can learn to live with an endemic virus, we won’t survive if endemic corruption eats away at the well-being of our nation.

In today’s vaccine-obsessed world, there’s no better analogy than this one that U2 frontman and activist Bono came up with in 2013: “The biggest disease is corruption. The vaccine is transparency.” 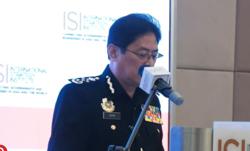