Death of a nation — what it means

When the people of a country cannot trust each other and falsely believe that one group can do without the others, they are easily fooled into losing sight of the founding principles. That is when the country loses its soul and becomes a zombie.

IT IS universally accepted that everything has an end. However, there is no broad agreement on what an “end” is and its form or nature.

When a body becomes lifeless, it is said to have come to an end. It does not grow. In fact, it deteriorates and disappears over time.

But what about the “soul” or “spirit”, or what the Vulcans in Star Trek call “katra”? Does that linger on? That is more difficult to ascertain as it is not a physical entity.

Some offer the opinion that if the teachings and thoughts of a person live on in the minds and hearts of others for a long time, that person never truly dies. People have been pondering this ever since mankind became aware of the mortal end.

But this article is about another question: When does a nation die?

A country can be said to have physically died if there is a terrific volcanic eruption and the whole land mass somehow disappears. Or if it is engulfed by a giant tsunami and like Atlantis, it is submerged below the ocean surface. This is similar to a corpse decomposing.

What if one country defeats another in a war and the latter’s name and political independence are gone? Does it cease to exist? Well, yes, because there is no “body” left and the people of the conquered country have become citizens of the victorious country.

But what if the country’s borders are intact and no meteor is going to strike any time soon? Can that country die?

My contention is that when a nation – that is, the people of the country – loses the original perspective of why it was formed and what principles it was supposed to uphold as a single family or entity, then it can be said that the country is like a body without a soul.

A body that breathes, eats, defecates and procreates but has no “life”. It is akin to a zombie awaiting the blissful concept of total physical destruction.

When does a family die although the members are physically alive? When does a marriage cease to exist when the licence of togetherness is still valid? I believe that a family, a marriage or a nation dies when there is a refusal to trust one another.

How do two people who have tied the knot of matrimony begin to mistrust each other? They have gone through thick and thin to raise their children, and yet there is mistrust. Why?

How do the people of a nation that has ridden out a communist insurrection, threats of invasion, economic catastrophes and bloody riots now begin to treat each other as enemies?

Once, I saw my daughter sitting alone on the porch of our house in Johor. It was 20 years ago. I asked what was on her mind. She said she was deciding whether to stop being friends with one of her friends.

I asked why she was thinking that way. She said she was angry with the friend for doing something bad to her. She then asked me whether she should end that friendship.

I thought for a while and asked her a couple more questions. Has this friend helped her at any time? Yes, several times in fact. Has this friend defended her from other friends? My daughter nodded. Well, then, I told her, you should compare this bad thing she did against the many times she has been a good friend and weigh it yourself. After thinking for a while, my daughter decided not to end the friendship.

I have noticed that couples often get divorced when there is a sense of “independence” from each other. This is usually in terms of financial independence.

It seems to me that the sense of being able to live without each other supports the mistrust brought about by shallow thinking. Like my daughter on the porch.

I find that when one group of people feel that they can “live without the others” because of a sense of financial independence, this group is the easiest preys for ignorant and opportunistic people who create historical narratives or political stands that put the others in a very bad light.

As long as this group fails to realise that there is no such thing as the “financial independence” of one group without the others, mistrust will easily flower.

Mistrust blooms when there is the manure of lies, half-truths and shallow narratives spread by selfish religious, political and even “educated” personalities who build their careers upon the fears of their own people.

We do not need a meteor strike, a catastrophic volcanic eruption or a huge tsunami to destroy our nation. Our nation dies when its people no longer trust each other and treat one another as enemies in a war with no end in sight.

Trust is the personal act of accepting that the others are always part of us and that we have common interests, challenges and goals in working towards mutual success. Selfishness, unfounded fears and the inability to learn new perspectives on our history and our future together are the silent killers of our nation.

To me, our people and our country have failed the test of trust. Malaysia is a deteriorating body with the soul floating away on its final tether. We are now seeing the birth of a country without a soul that defines our spirit, honour and dignity. 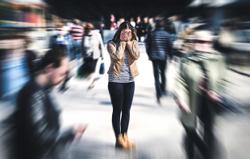 When panic disorder hits a nation

Why big nations were brought low by the pandemic