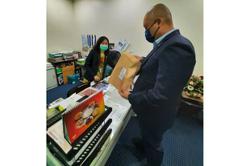 The politics of the ‘wild, wild east’ just got wilder.

“THERE will be a new government in Sabah next week, ” a Perikatan Nasional insider told me on Tuesday afternoon.

Two events on that day made the insider’s prediction plausible.

Here’s the context for those who are not familiar with politics of the wild, wild east.

Musa, who is with Umno, or arguably, linked with Parti Pribumi Bersatu Malaysia and Sabah chief minister Datuk Seri Shafie Apdal (pic), who is Parti Warisan Sabah president, are absorbed in a bitter rivalry for the dominance of Sabah politics. There’s a court case initiated by Musa to determine whether he is the rightful Sabah chief minister.

Peter, who is Warisan vice-president, is the right-hand man of Shafie. On Thursday, Peter pleaded not guilty to five money laundering charges at the Sessions Court in Kota Kinabalu.

“This is happening when our CM is very vocal against Perikatan Nasional and is a staunch supporter of (sacked Bersatu chairman Tun Dr Mahathir Mohamad) and the Opposition, and at the same time Musa’s charges were dropped, ” he said, in a phone interview.

“Whether the timing is a coincidence or not, it does not look nice. It is too obvious if you want to play political games.”

“It is a signal that the political persecutions against us have ended and we are taking over the Sabah government, ” he said.

On Thursday, Musa, who has been mostly absent from his home state, returned to Sabah and was greeted by Perikatan and Barisan leaders at the Kota Kinabalu International Airport. A well-informed political observer commented: “The tiger has been freed”.

The talk of the town is Musa will make a political comeback.

Musa lost his 15-year grip on the Sabah chief minister post when his two-day-old government collapsed after GE14. His Barisan state government was untenable as Pakatan Harapan was the Federal government. His state government clung to power with a two-seat majority.

The inevitable happened. Six Barisan assemblymen (four from Umno and two from Upko) abandoned the ruling state coalition. They supported Warisan and Pakatan which won 29 seats in the 60--seat state assembly.

Warisan president Datuk Seri Shafie Apdal was controversially appointed chief minister. However, Musa claimed he did not resign and the Yang di-Pertua Negeri did not have the power to dismiss him.

Since the fall of the Pakatan government, to which Warisan was an ally, the talk in Sabah was that it was a matter of time before the Warisan/Pakatan Harapan/Upko state government would fall.

In the fight between Prime Minister and Bersatu president Tan Sri Muhyiddin Yassin and sacked Bersatu chairman Tun Dr Mahathir Mohamad, Shafie took the side of the latter.

For many Sabah politics watchers, it was a perplexing decision.

On Thursday, in a show of support, Shafie called for a press conference.

The Sabah chief minister said all 15 Sabah MPs and 47 assemblymen from Warisan, Upko, DAP and PKR were not budging and would firmly remain united.

Two MPs and three assemblymen did not attend the press conference. Shafie explained that they could not make it for the event.

The Sabah chief minister admitted that his government was under siege. He claimed that daily there was a Perikatan grand plan to woo his MPs and assemblymen to cross the floor. He said they were enticed with positions and money while being intimidated through the various instruments of the government. But these attempts have failed, he said.

From Shafie’s show of force, it looks like his government is solid. But the political observer wryly told me that “it is as solid as a melting block of ice.”

Will the Sabah government fall, following the trend in Peninsular Malaysia where Johor, Melaka, Perak and Kedah fell after the collapse of the Pakatan federal government in late February?

“As far as I am concerned the YBs, especially from Warisan, are intact, we are united behind the CM. We have a chat group and everyone responded semua (all) ok, ” said Loretto, the Warisan secretary-general.

“But if you want me to guarantee (that no one will jump), nobody can guarantee that. If you ask the same question to Muhyiddin, he can’t guarantee that his MPs will not jump, ” he said.

Abdul Aziz, who I met for coffee in Bangsar on Thursday along with Umno Sabah Youth information chief Mohd Kurniawan Naim Moktar, explained that the Barisan assemblymen who jumped to join Warisan and Upko were expected to ditch the ruling state government.

“They said they jumped to support the Sabah government for the sake of the people.

“Now that we have a change in the Federal government, they can use the same reason to leave the Sabah government, ” he said.

Abdul Aziz also said there was discontentment among the assemblymen who won their seats under the Warisan, DAP or PKR ticket over how Shafie ran the state. They too, he said, would jump.

“Not in the meantime. The signals are there. But the big signal for Warisan assemblymen to come out of the party is not there yet, ” said Mohd Kurniawan Naim.

From talking to political operatives in Sabah, it is likely there would be two batches of defections.

The first batch will be former Barisan assemblymen ditching the Sabah government. There are 10 of them. But not all will be accepted as there are at least three assemblymen who Barisan deem as traitors.

The second batch will be assemblymen who won their seats under the Warisan, DAP and PKR tickets.

The defection of the second batch will depend on the price of their loyalty.