Disrupting harmony? PAS should look in the mirror

There are more fights, disruptions and bickering at political functions and football matches than at Oktoberfest events.

IT may be news to some, including the Minister in the Prime Minister’s Department (Religious Affairs) Datuk Idris Ahmad, but Oktoberfest has been celebrated here for decades now.

I have lost count of the number of Oktoberfest celebrations I have attended.

My first experience of this wonderful festival was at the Malaysian German Society (MGS) in Penang in the early 80s.

For more than 40 years, the MGS Oktoberfest has attracted Malaysians with a Bavarian band specially flown in from the south of Germany, with authentic German food served.

I don’t recall any disruption to social harmony, as Idris imagines and claims.

He told Parliament recently: “Although non-Muslims are not prohibited from drinking alcohol, the government is of the opinion that allowing this festival to happen and making it open to the public should not happen, as it will cause social problems, as alcohol is seen to affect harmony, order and safety of the community.”

There are more fights, disruptions, and bickering at political functions and football matches than at Oktoberfest gatherings.

If it leads to drink driving, then that is the business of the police, and not Idris’ for sure.

Non-Muslims cannot be blamed if they feel that this is another infringement of their rights.

Why should we have to confine ourselves and seemingly hide just to have a drink?

Malaysia is a multi-ethnic country, and non-Muslims are free to drink, as we know. Is this an arbitrary decision of a PAS leader or that of the government?

In recent years, there seems to be a rise in the degree of intolerance, with obstacles even placed on private companies wanting to host such gatherings.

In 2017, the One Utama shopping complex had to call off its Oktoberfest festival, despite its readiness to move the event to the basement carpark, following a directive from the Petaling Jaya City Council (MBPJ).

Non-Muslims in Malaysia know too well their limitations and when not to cross the line.

No one is foolish enough to apply for a permit to hold Oktoberfest at Dataran Merdeka, for example, or in areas which are predominantly Muslim.

It is not just disrespectful.

From a commercial point of view, it would be loss-making as it would not be the targeted consumer market.

Non-Muslims will also not extend invitations to Oktoberfest, for sure.

PAS has been consistently waging a fight against Oktoberfest since 2014, claiming that it would be insensitive to Muslims.

If we go by the twisted logic of PAS leaders, then the Kaamatan and Gawai in Sabah and Sarawak, where spirits also flow, would lead to social disharmony.

Even at the ongoing Hungry Ghost festival, fund-raising for charity is done with alcohol served at the dinners.

Does that mean this too has to be banned or hidden?

No one should stop eateries, pubs, and restaurants from holding Oktoberfest festivals, and the local authorities should not be acting against these premises.

Even predominantly Muslim countries like United Arab Emirates, Turkiye and Palestine are gearing up to host Oktoberfest again this time, after a two-year hiatus because of the Covid-19 pandemic.

In Palestine, the Taybeh Oktoberfest, which started in 2005, will be held with an expected 16,000 visitors, according to its website. Ditto for Morocco, Turkiye, Lebanon, and many other countries.

Just do a search.

In previous celebrations in Dubai, there were 32 tents, a Ferris wheel, and even a life-sized replica of the famous statue of Lady Bavaria and her lion, according to reports.

PAS seems to have become louder now, as it is in the ruling Federal Government.

But it needs to be reminded that the guardians of Islam are the Malay Rulers.

Recently, Kelantan Deputy Mentri Besar Datuk Mohd Amar Nik Abdullah claimed the people of Kelantan are happier than those in Selangor, basing his argument on Malaysia’s Happiness Index, where Kelantan was purportedly ahead of Selangor.

We do not know why Mohd Amar chose to point fingers at Selangor.

Perhaps he was chafed by the Sultan of Selangor’s royal tick-off given to Idris over the minister’s objection to the Bon Odori festival.

PAS should worry about its inability to resolve its water, logging and drug problems; the addiction to pornography; and increasing incest and molest cases, before lecturing others.

Not to forget its tainted image after its leaders tried to justify corruption and even said a corrupt Muslim leader is more acceptable than an honest non-Muslim leader.

Get your backyard in order first.

Malaysians of all faiths and races are certainly more worried about the religious and social disharmony caused by PAS. 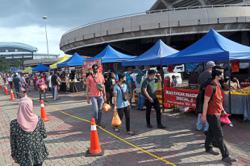