FILE PHOTO: A view of the cereal terminal with grain silo in the Black Sea port of Constanta, Romania, May 11, 2022. REUTERS/Olimpiu Gheorghiu/File Photo

BUCHAREST (Reuters) - Ukraine continues to ship grain across the Danube to the Romanian Black Sea port of Constanta even after some of its own ports reopened, and the new routes are likely to remain, the deputy chief of freight logistics group TTS said on Wednesday.

Ukraine's grain exports slumped after Russia invaded the country on Feb. 24 and blockaded its Black Sea ports, driving up global food prices and prompting fears of shortages in Africa and the Middle East.

The country, one of the world's leading grain exporters, was forced to find alternative routes by train via its western border or through its small Danube river ports of Reni and Ismail into Romania.

Those routes are still being used even after three Ukrainian ports reopened under a U.N.-backed safe passage deal, as too few ships are arriving in Ukraine.

"Some of the traders we deal with have reduced their operations at Reni and Ismail, but the flows we have created are still going and we see them going even after the war ends," TTS deputy chief executive Ion Stanciu told Reuters in an interview.

"Our grain volumes are slightly lower but the pace is almost the same as before."

TTS Group handles agricultural products, minerals and chemicals across the Danube river and in the Black Sea port of Constanta. It operates the largest fleet of barges on the Danube, with a transport capacity of 800,000 tonnes, while its grain silo in Constanta can store up to 110,000 tonnes.

Since the war started, the group has transported nearly 1 million tonnes of cargo to and from Ukraine, with grains accounting for just under half of the total, Stanciu said.

TTS director for investor relations Gabriel Techera said the company had implemented a logistics chain based on two offshore buoy terminals in Constanta port, fast-tracking the loading of grain from barges to ships.

The company has also invested over 10 million euros this year in its fleet. It has a full-year investment target of 20.1 million euros ($19.35 million).

Ukraine has sent roughly 4.5 million tonnes of grains to Constanta since the war started, the port told Reuters.

TTS, which listed on the Bucharest Stock Exchange last year and was included on an FTSE Russell index, saw its turnover rise 46.9% on the year in the first half, and a 28.5% jump in the volume of grains it handled.

Increased demand and a jump in tariffs have helped offset higher operation costs, including steel and electricity prices, Stanciu said. An additional growth boost will come from contracts to bring coal shipments to Romania, Serbia and Ukraine ahead of winter. The company was also actively looking at potential acquisitions of ports or fleets. 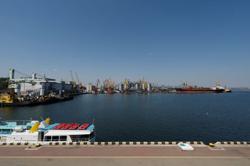