ANKARA, April 23 (Xinhua) -- Residential property sales are soaring in Turkey as households believe that buying a house is a sound investment for hedging against galloping inflation, experts said.

The record sales came amid shrinking supply and a slowdown in new investments due to steep cost increases in the construction industry.

Real estate professionals think that the rush for houses will continue so long as the inflation rate remains elevated.

He said nowadays anyone who has some savings or can pay by installments for a couple of years is rushing to secure bank loans to buy property.

"The first quarter of 2022 saw an increase of 34 percent in property sales compared to the previous year, according to official figures ... Despite high inflation, people are buying real estate which is seen as a secure shelter," he added.

Despite the rising inflation, the central bank has cut its policy rate by 500 basis points since September to 14 percent, at the expense of a slump in the Turkish lira, which has fallen some 60 percent in value against the greenback since the start of 2021.

Turkey's construction sector has been one of the country's growth pillars for the past two decades, one of Erdogan's success stories.

But the COVID-19 pandemic and the sharp decline of the Turkish lira have hit the sector amid soaring raw material costs, said Enver Erkan, chief economist at Istanbul-based Tera Securities.

According to the Residential Property Price Index updated by the central bank in February, the annual housing prices have jumped by 96.4 percent in nominal terms, while in Istanbul, the country's largest city and financial hub, it was 106.3 percent.

"When we look at house sales statistics, we can conclude that the demand is still strong. It's possible to attribute this to several reasons such as the need for residing and being seen as a financial investment in line with traditional property acquisition," Erkan explained.

The economist added that home prices have fueled rent prices as well, especially in major cities, making life more difficult for households that have seen their purchasing power declining in recent years.

Meanwhile, foreigners are also interested in purchasing property in Turkey. Sales to foreigners rose 31 percent in March to 5,567 units, the TurkStat said.

According to a TurkStat report published last week, Iranian and Iraqi topped the list with a total of over 1500 homes, in a move that may provide them with a Turkish passport.

Ankara adopted the citizenship-for-homes scheme in 2017. A year later it cut the minimum price from 1 million U.S. dollars to 250,000 dollars to attract foreign buyers. 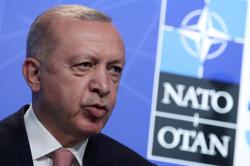