(Reuters) - The Saudi-led coalition fighting in Yemen said early on Saturday it launched air strikes on military targets in the Yemeni capital, Sanaa, asking civilians not to gather around or approach the targeted sites, Saudi state TV reported.

The coalition, which intervened in Yemen in March 2015 after the Iran-aligned Houthi movement ousted the Saudi-backed government from the capital, has ramped up strikes on Houthi sites in Sanaa in recent days. 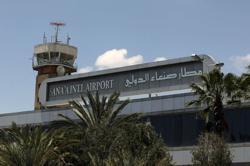