By Gavin Jones and Angelo Amante

The votes on Sunday and Monday complete a round of centre-left triumphs in Italy's largest cities and mark a setback for the rightist alliance which is nonetheless favourite to win the next national election due in 2023.

Centre-left candidates had already easily won Milan, Naples and Bologna two weeks ago without the need for a run-off.

In Rome, former Economy Minister Roberto Gualtieri from the Democratic Party (PD), was projected to win by 60% to 40% against the right's Enrico Michetti, an impregnable lead with the count still underway.

"I won't disappoint you ... now we begin a task of extraordinary intensity to relaunch Rome," Gualtieri told reporters, promising to turn the city into "a champion of the ecological transition".

He faces an arduous task to fix the capital's most chronic problems, including haphazard trash collection and a dilapidated and inadequate public transport system.

Most Romans seem convinced that nobody can turn the city around, with just 41% bothering to cast a vote.

In Turin, the PD's Stefano Lo Russo was projected to win by 59% to 41% against the right's Paolo Damilano.

Both cities were previously run by the 5-Star Movement, whose candidates were defeated in the first round.

With an overall turnout below 45%, the results are not expected to have immediate repercussions for the stability of Prime Minister Mario Draghi's national unity government, analysts say.

Gualtieri, who lagged by three points after the first ballot, seems to have picked up most of the votes of those who supported the first-round losers - 5-Star's outgoing mayor Virginia Raggi and Carlo Calenda, an independent centrist.

The results dealt a blow to Matteo Salvini and Giorgia Meloni, respective leaders of the rightist League and Brothers of Italy which dominate a conservative alliance that leads at a national level, according to recent opinion polls.

However the rightist bloc, which includes Silvio Berlusconi's Forza Italia, draws most of its support from small towns and villages, and analysts say it may be misleading to draw national conclusions from the mayoral votes.

"Rightwing voters tend to mobilise more at national elections than at local ones," said pollster Antonio Noto of the Opinio Consortium.

"Brothers of Italy has fanned the flames of anti-vaccination protesters, while the League has been ambiguous in its support for Draghi's government. Neither policy seems to have paid off," he said.

The next parliamentary election is shaping up as a battle between the right and a centre-left bloc led by the PD and the 5-Star Movement.

Among other cities at stake in the mayoral run-offs, the right held on to northeastern port Trieste but lost Varese, close to the Swiss border, in an area where Salvini's League has its historic roots. 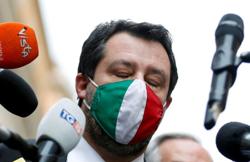