MELBOURNE (Reuters) - Australia should set out a new national legal framework to protect Aboriginal heritage, an inquiry into the destruction of ancient rock shelters for an iron ore mine found in a report issued on Monday.

The parliamentary panel issued its findings after a 16-month inquiry into how Rio Tinto Ltd last year legally destroyed the sites at Juukan Gorge, Western Australia, that showed evidence of human habitation over 46,000 years, from the last Ice Age.

Widespread anger at the destruction of the caves cost the jobs of its chief executive Jean-Sébastien Jacques and two other senior leaders and led Chairman Simon Thompson to flag he would step down in 2022.

In its interim report in December, the inquiry said that Rio should pay restitution to the traditional owners of the area and laid out broader industry guidance that included reviewing consent practices.

The inquiry has held 23 hearings and received close to 200 submissions since it began in June 2020. 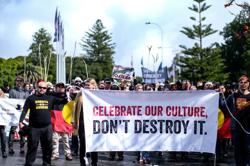