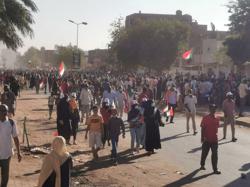 FILE PHOTO: Sudan's ousted President Omar al-Bashir is seen inside the defendant's cage during his and some of his former allies' trial over the 1989 military coup that brought him to power in 1989, at a courthouse in Khartoum, Sudan September 15, 2020. REUTERS/Mohamed Nureldin Abdallah

KHARTOUM (Reuters) - Sudan will not decide before next week at the earliest whether to hand over former President Omar al-Bashir to the International Criminal Court to face charges of atrocities in the Darfur conflict, the ICC chief prosecutor said on Thursday.

The Sovereign Council, a joint military and civilian body overseeing Sudan's transition towards democracy, must approve measures on joining the court and handing over suspects before Bashir can be turned over.

"I was informed that a meeting ... is scheduled for next week and we'll see what that brings," ICC chief prosecutor Karim Khan said in a news conference at the end of his first visit to Khartoum.

"Ultimately the decision to cooperate and how to cooperate, is one to be decided by Sudan, not by me," he said. Khan said he had not discussed with Sudanese officials a potential date for Bashir to be turned over.

ICC arrest warrants for Bashir, who ruled the country for 30 years until he was ousted in 2019, accuse him of atrocities in crushing a revolt in western Darfur in the early 2000s. Bashir has denied the charges.

Bashir is imprisoned in Sudan as he stands trial on domestic charges arising from the 1989 military coup that brought him to power and repression of protests against his rule.

The ICC and Sudan's justice ministry on Thursday signed a memorandum of cooperation, Khan said.

Conflict broke out in Darfur in 2003 after mostly non-Arab rebels rose up against Khartoum. Some 300,000 people were killed and 2.5 million driven from their homes. Government forces and mainly Arab militias were accused of atrocities, charges that authorities at the time denied.

Khan plans to visit Darfur in November and submit a report on progress to the U.N. Security Council. 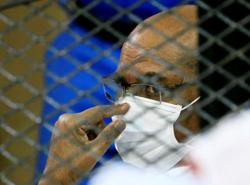