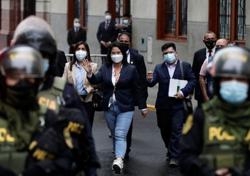 Aznar, who was the first to speak, denied having any knowledge of PP's alleged parallel accounting scheme.

The trial and high-profile testimony, done remotely, puts the party's past murky dealings back in the spotlight amid a crucial election campaign in the Madrid region.

The case stems from a corruption scandal related to the use of a slush fund in the 1990s and early 2000s to illegally finance campaigns, which resulted in dozens of high-ranking PP members getting jailed.

The High Court is now looking into whether the party refurbished its historic headquarters in central Madrid using illegal funds, and if party bigwigs allegedly took envelopes full of cash.

"I never received any complement to my salary...I don't know what others have done. Nor do I care," Aznar told the court, adding he had declared all his income in his tax return.

PP leader Pablo Casado recently announced his intention to sell the building in the prestigious Genova street in a symbolic attempt to leave the party's corruption scandal behind and regain some of the voters it lost to newly created political parties on its left and on its right over the past decade.

Former PP treasurer Luis Barcenas, who is serving a 29-year prison sentence, has recently accused Rajoy of having knowledge of the party's parallel accounting, which is something the ex-premier has always denied.

Rajoy was ousted from power in June 2018 after losing a no-confidence vote in the wake of the scandal. He stepped down as party leader and went back to his office as property registrar. He has always denied wrongdoing.

Aznar, who stepped down as party leader in 2004 and has worked in the private sector since, has also denied wrongdoing.