By Guo Ying and Quan Xiaoshu 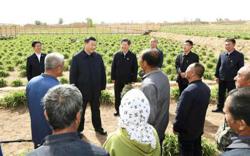 In the past five years, China has focused on the technical bottleneck of the agricultural industry and promoted more than 50,000 new varieties and technologies to increase the quality and efficiency of this industry in poor areas, He Defang, an official from the Ministry of Science and Technology told a press conference.

China has also sent a number of sci-tech experts to poor areas to provide intellectual support and promote entrepreneurship, He said, adding that around 1,152 innovation platforms have been established to allocate scientific and technological resources to poor areas.

He cited examples of science and technology's role in poverty alleviation, saying that the Ministry of Science and Technology has helped Zhashui County in northwest China's Shaanxi Province create three innovative platforms and 30 demonstration bases to cultivate wood-ear, an edible fungus widely used in Chinese cuisine. The annual output value of the fungus industry has reached nearly 300 million yuan (about 45 million U.S. dollars).

China will give full play to the advantages of sci-tech resources and promote innovation-driven development for rural revitalization, He said.