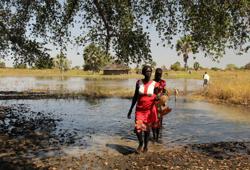 "I welcome the much-needed funding from the CERF. It will help provide immediate relief to the most vulnerable people and scale up the humanitarian response in the most affected counties along the White Nile," Noudehou said in a statement issued in Juba.

The UN agency added that mosquito nets, nutritional supplies, as well as basic hygiene items will be provided to improve health and sanitation conditions and help prevent water-borne diseases.

"Adults who are fit to work will receive food or cash in return for repairing dykes to defend their communities from future floods," it said.

According to the UN humanitarian agency, more than 80 million dollars is needed for the overall flood response, including 46 million dollars for immediate assistance to 360,000 people until the end of the year.

It said the CERF allocation complements the 10 million dollars earlier released by the humanitarian coordinator through South Sudan's Humanitarian Fund to kick-start the flood response.

Some 800,000 people have been affected by flooding in South Sudan since July, the UN said.

Many areas are still underwater and approximately 368,000 people are displaced and unable to return to their homes and lands.