WASHINGTON: The United States House of Representatives has passed a Bill banning the buying or selling of shark fins nationwide on Wednesday (Nov 20).

The Shark Fin Sales Elimination Act, led by US Representatives Gregorio Sablan and Michael McCaul, passed on a vote of 310-107.

The bill seeks to prohibit the import, export, possession, trade and distribution of shark fins or products containing shark fins as an effort to stop the declining shark populations.

The global shark fin trade contributed to the loss of as many as 73 million sharks each year, said the Animal Welfare Action in a press statement.

“It degrades marine-based ecotourism and shark-diving experiences throughout the world, ” he said.

Currently, the act of shark finning and possession of shark fins aboard a vessel is prohibited in US waters under the Shark Conservation Act 2010.

However, the law does not stop the domestic trade of their parts and shark fins derived from cruel fishing practices around the world are sold in the US.

The Shark Fin Sales Elimination Act seeks to close this loophole and end the US’ contributions to the trade.

Sablan, a delegate from the Northern Mariana islands, said that three territories and a dozen states had already put a ban in their laws, so it was high time that the House joined them.

“It is my hope that the Senate quickly acts so we can end our contribution to the global trade of shark fins, ” he was quoted as saying.

McCaul said that the survival of the apex predators were of great importance and the bill would help to ensure that they will be around for decades to come.

“Congress has struck down animal cruelty by voting in favor of the Shark Fin Sales Elimination Act, ” said McCaul, a representative for Texas’ 10th District. 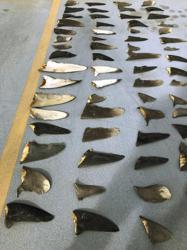 Factbox: A look at the 44 competitive races in the U.S. House of Representatives