BANGKOK (Xinhua): The State Railway of Thailand (SRT) has on Wednesday (April 1)suspended the service of its 44 commercial trains to prevent the spread of Covid-19.

"Many provinces are locked down already so it is not necessary to run trains at those provinces," said SRT acting governor Warawut Mala.

Thai Prime Minister Prayut Chan-o-cha on Tuesday warned that if Thais don't observe social distancing and follow the guidelines of the Government, he will order the shutdown of all public transport to contain Covid-19.

Thailand's Ministry of Public Health on Wednesday reported 120 new Covid-19 cases and two deaths, with the total number of confirmed cases in the country rising to 1,771 and death toll at 12. - Xinhua 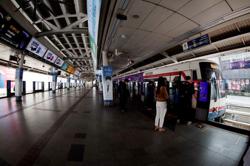