BUTTERWORTH: When they reunited for the Chinese New Year dinner, the Chans in Butterworth did it in a big way.

A total of 487 family members from five generations of the same lineage turned up for the homecoming meal, filling up an entire school hall with warmth and cheer.

Among them was 55-year-old Chan Teng Hee, a third-generation member of the clan.

“My grandfather had 10 sons and four daughters when he came from Guangdong, China, before World War II.

“At present, 687 of us come from the same lineage, some of whom live in other states and countries.

This is the third time the Chan family has held this massive get-together.

“There are many new faces in the family, and we thought it would be good to meet again.

“We had started planning in September last year, and many agreed to it,” added Teng Hee, who is the second of four siblings.

His father, Chan Leon Chong, 88, was born and raised in Butterworth, and was the oldest member at the dinner.

“I’ve regularly met some members who live nearby, but never all of them on a single occasion.

“Hopefully, we continue strengthening the bonds and growing together,” he said.

To liven up the festive atmosphere and help break the ice, some families were called on stage to sing songs together, followed by a gift exchange session.

The celebration culminated with taking a family photo of everyone together. 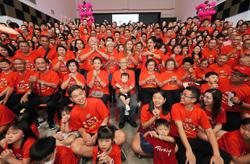