KL cops receive over 400,000 reports until November this year KUALA LUMPUR: More than 400,000 reports on various criminal, narcotic and commercial offences were received by the Kuala Lumpur police between January and November this year.

"A total of 97% of the reports received by the Narcotics Criminal Investigation Department (JSJ) were taken to court, followed by 73% for commercial cases and 63% for criminal cases.

"The Kuala Lumpur police recorded the highest rate of prosecution compared to other contingents and this is something I am proud of," he said in his speech at the Kuala Lumpur Police Sports Appreciation with media partners here on Friday (Dec 9) night.

He also expressed his appreciation to the 9,200 police personnel and staff of the Kuala Lumpur police for their commitment to the force. - Bernama 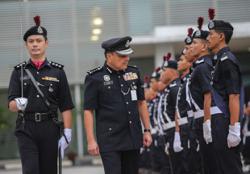