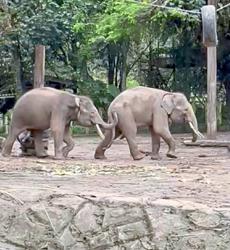 KOTA KINABALU: Dozens of crocodile sightings across Sabah is creating alarm among the local residents, as stretched wildlife rangers have roped in villagers and police personnel to help the hunt for the creatures.

Sabah Wildlife Department director Augustine Tuuga said that there were 29 sightings in various areas of the east coast Lahad Datu district, at least six in Kota Kinabalu, three in Sandakan and at least one in Tawau.

"We have received many reports throughout Sabah," Tuuga said when contacted on Saturday (Dec 10).

He added that where possible, department personnel would capture or shoot the reptiles themselves.

"There are other cases in remote areas such as Paitan (north eastern Sabah), where we have allowed village security and development committees to take the necessary steps to hunt the crocodiles along the river close to their villages," he said.

He added that the department's manpower is stretched in tackling the recent sudden surge in reports of crocodile sightings across the state.

Tuuga said police in Lahad Datu had also informed the department of crocodiles spotted in many areas including beachfronts, housing areas and the latest in waters around the marine police base in town.

"Lahad Datu police have written to us and highlighted public concern and fear of the sighting of the crocodiles in the district," he said.

He said Lahad Datu police had also listed 28 areas with the location coordinates of the sightings within the district and its neighbouring areas in Tungku, Desa Kencana and Tambisan.

He said wildlife rangers had shot two crocodiles with the latest on Friday (Dec 9).

"The two killed were not the crocodile involved in the attack on a man and his one-year-old child (still missing)," he said, referring to the Dec 1 incident where a crocodile snatched the boy and his father who tried in vain to stop the attack while they were on wooden boat near the marine police jetty in Lahad Datu.

Crocodiles were also spotted at both the popular family outing spot along Likas Bay beach, as well as the flood mitigation pond in the same area along the Likas Bay road.

Tuuga said that they have launched an effort to trap the crocodiles in the area.

He said the public sightings within the Likas Bay area was also re-confirmed in an official letter by the Sabah Department of Drainage and Irrigation (DID).

The sightings of crocodiles at the Likas Bay pond had been reported several years ago and warning signs have been put up by the Wildlife Department ever since.

However, avid anglers still go into the lagoon to catch fish without any fear. In previous interviews with The Star, they said they have seen the crocodiles but the reptiles have never disturbed them.

Tuuga advised anyone going down to the sea or rivers to be aware of their surroundings to prevent accidents from happening.