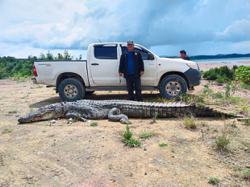 Prior to the Dec 8 incident, the boy had gone down from his water village house at Kampung Air to get his pet chicken at around 5.50pm.

His cousin who was nearby, saw the reptile lurking in the waters close to the boy’s home, and screamed to alert him of the crocodile’s presence.

“The boy managed to kick free and escape,” he said in a statement on Saturday (Dec 10).

The boy was later taken to the hospital for treatment, where he was treated for deep cut wounds and a fractured bone on his right leg.

ACP Rohan said the boy was now recuperating in the hospital.

On crocodile nests in Lahad Datu, he said they are aware of a total of 28 nests in the district, with 13 in the main Lahad Datu area, three in Tungku, eight in Desa Kencana and four in Tambisan.

“All these information have been forwarded to the Wildlife officials, and I am sure they are also busy handling these cases,” he said.

ACP Rohan said the police are ready to provide assistance to authorities or whoever are involved in initiatives to address this matter.

He said the presence of crocodiles at residential areas posed a danger to the people.

He advised the public to be aware of their surroundings and to take extra precautions when going down to the sea or river for any activities.

In a Facebook post, he said that this matter needs to be addressed properly for the safety of the villagers involved.

He said that between 2020 and 2022, there had been a total of 12 crocodile attacks reported in Lahad Datu, out of which eight were fatal. 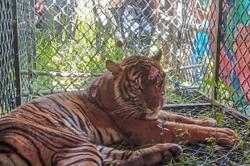