KUALA LUMPUR: A local woman property agent lost more than RM7mil after being duped in a Macau scam by someone impersonating a Health Ministry (MOH) officer on May 18.

Brickfields police chief ACP Amihizam Abdul Shukor said the 66-year-old woman claimed she received a call from a man who informed the victim that she possessed (52) doses of Sinovac vaccine applied illegally in the victim's name and that action would be taken by the Health Ministry .

He said the call to the victim was later passed to a ‘policeman’ who told the victim she was involved in illegal money laundering and there was a warrant of arrest in her name.

"Believing the story, the victim was told to open seven new local bank accounts and surrender all bank account information to the suspect.

"The victim was then ordered to transfer her money amounting to more than RM7mil into the seven new accounts,” he said in a statement on Tuesday (Dec 6).

According to him, the victim realised she had been cheated after checks with Bank Negara found that withdrawals were made from her seven bank accounts without her knowledge.

He said the victim who was unhappy and felt cheated, lodged a police report yesterday (Dec 5) and the case was investigated under Section 420 of the Penal Code for cheating.

The victims will then be asked to make payments to get them off the hook. - Bernama 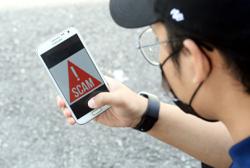