ISKANDAR PUTERI: The Johor government hopes the Hospital Sultanah Aminah 2 project could be included in the Federal Budget for next year.

“With a new Health Minister who is from Johor, we hope the project can be set in motion by including it in next year’s Budget.

“However, the project was not included in Budget 2023 tabled in October and we hope the Federal Government can look into the matter,” he told reporters during the state assembly recess at Kota Iskandar here on Sunday (Dec 4).

At the time, he said RM500mil was required to build the facility, which will comprise specialist clinics, staff quarters and a Health Department office.

He added that a plot of 207.5ha land in Kempas has been identified for the project and the Health Ministry has also paid the land premium. 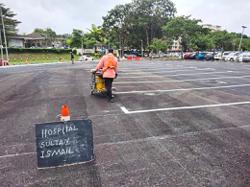