Mohamad Sofee was fielded in place of the late M. Karupaiya, who passed away before GE15 polling day.

Sivarraajh, however, has stayed mum on recent developments, with his team saying they would release a statement later.

ALSO READ: Warisan pulls out of Padang Serai election, name will still appear on the ballot

News portals have reported that Sivarraajh would withdraw from the race after Prime Minister Datuk Seri Anwar Ibrahim, who is Pakatan chairman, and his Barisan counterpart Datuk Seri Dr Ahmad Zahid Hamidi reached an agreement on this.

Warisan candidate Mohd Bakhri Hashim has pulled out from the race.

Warisan, like Barisan, is part of the Anwar-led unity government.

The Padang Serai election was postponed to Dec 7 following the death of Karupaiya, who was the incumbent MP, on Nov 16.

The 69-year-old former soldier won the seat in 2018 with a majority of 8,813 votes against MCA's Datuk Dr Leong Yong Kong and PAS' Muhammad Sobri Osman.

Apart from Padang Serai, polling for the Tioman state seat in Pahang will also take place on Dec 7 after Perikatan candidate Md Yunus Ramli, 61, died hours before the general election.

Pakatan has pulled out of the Tioman contest and Barisan candidate Datuk Seri Mohd Johari Hussain will take on Perikatan's Nor Idayu Hashim and others.

Padang Serai GE15: Employers urged to give time-off for employees to vote 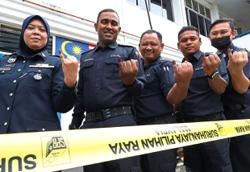