By MARTIN CARVALHO and ZAKIAH KOYA

Sunway University economics professor Dr Yeah Kim Leng said there are circumstances where the open tender process may not be feasible.

He added that the open tender process is not applicable when there is only a sole supplier involved.

Prof Yeah noted that more transparency is needed if great reliance is to be placed on the process of open tenders.

To further safeguard the bidding and selection process, Prof Yeah suggested that personnel from independent agencies such as the Malaysian Anti-Corruption Commission or Finance Ministry be roped in for the selection committee or task force.

On Tuesday, Prime Minister Datuk Seri Anwar Ibrahim said questionable procurements and approvals without tendering must no longer be practised to curb leakages and corruption.

Ernst and Young Partner in Procurement Tan Chiaw Hooi said that while direct negotiations may not be able to provide the best results, there are some merits for this.

“It may be premature to do away with direct nego completely.

“We have also seen this in other countries where there is an exclusion to manage direct nego.

“There are certain purchases (for example, involving original equipment manufacturers) where there are a limited number of suppliers (in some cases, only a single supplier) who can meet the capability and specification requirements,” she said.

“The lack of coordination makes suppliers confused about what the government needs.

“This leads them to submit low-quality quotes and as a result, generates additional rounds of questions and delays,” he said.

He also suggested the use of digital technology to improve transparency in the bidding process.

Former Minister in the Prime Minister’s Department (Special Functions) Datuk Dr Abdul Latiff Ahmad said some matters in the government cannot be outsourced via open tenders because of issues of high security or urgency for the service or product.

Another matter which came under much public scrutiny recently due to it not being procured through open tenders was the development of the MySejahtera application during the Covid-19 pandemic.

Former finance minister Tengku Datuk Seri Zafrul Abdul Aziz and former health minister Khairy Jamaluddin were called up by Parliament’s Public Accounts Committee (PAC) in April to explain why the procurement was given to a private company.

It was reported that the MySejahtera app was initially obtained through the National Security Council under a corporate social responsibility effort with a private company out of urgency at the height of the pandemic in early 2021.

Based on its report, the PAC said the Cabinet had initially approved a RM196mil allocation for MySejahtera services over a two-year period from April 1 last year till March 31, 2023.

In October, Khairy said the ministry would be complying with PAC’s recommendations.

Among them is that the parties involved will soon sign a contract to ensure that the MySejahtera app and its data is owned by the government. 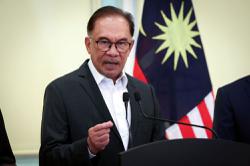