PETALING JAYA: Datuk Seri Saarani Mohamad (pic) is confident that the Barisan Nasional-Pakatan Harapan state government will survive until the end of its term.

The Perak Mentri Besar said that he was informed by the state Pakatan chairman Datuk Seri Mujahid Yusof Rawa that the coalition will defend the state government until the end of the term.

"I was told that during Perak Pakatan's first meeting after the 15th General Election (GE15) in Ipoh, Mujahid had said they wanted to ensure that the government will remain until the end of term," he told reporters during a media engagement session at St Regis Hotel in Kuala Lumpur, late Monday (Nov 28) night.

He was asked to comment on talk from certain quarters that the Barisan-Pakatan-led state government will not last more than six months.

Saarani said that since the state Pakatan had given such an indication, it was unlikely that the state government will collapse mid-way.

"We have agreed to form a government together, and I hope that nobody prays that the state government will collapse within a period of six months," he added.

He also pointed out that although the state government comprised of groups with different ideologies, all parties can cooperate with one another, which is a good sign for the state.

"We have an agenda for a period of eight years to develop the state and I had said this during our first exco meeting the other day.

"We also welcome differing views, what more if the government is formed by two different groups but in the end we can sit at one table," he said.

Saarani was reappointed as the state’s mentri besar after receiving support from a total of 33 assemblymen from both Barisan and its new partner Pakatan.

In the state election held in tandem with GE15, Perikatan won 26 state seats, while Pakatan and Barisan garnered 24 and eight seats, respectively.

Earlier this week, Saarani revealed that Perikatan Nasional had attempted to "steal" four Barisan assemblymen, which caused him to hurriedly form the new state government with Pakatan.

Since no coalition secured a simple majority to form the government, Barisan agreed to work with Pakatan to form the administration and Saarani returned as the state Menteri Besar on Nov 21. 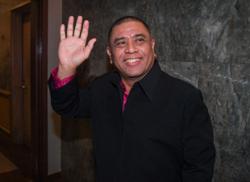