KUALA LUMPUR: The partial budget which will be announced on Dec 19 will hopefully maintain the incentives for civil servants that was announced during the 18th Civil Service Premier Message Gathering (MAPPA XVIII) and Budget 2023, says Cuepacs.

Its president Datuk Adnan Mat said the incentive is a Special Annual Salary Increase (KGT) of RM100 and Special Financial Assistance of RM700 from January 2023.

According to him, the partial budget should include the Special Financial Assistance for retirees amounting to RM350 and Special Aidilfitri Assistance of RM600 from March 2023.

"The initiative is one of those promised by the previous government as an employer to civil servants, and it would not be appropriate if it is withdrawn due to a change in government," a news portal reported him as saying in a statement on Saturday (Nov 26).

Adnan stressed that the increase and aid must continue and cannot be overlooked.

"Cuepacs does not want the same to recur as it did in 2018 when the initiatives promised by the government were not fulfilled due to the change of government after the 14th General Election (GE14).

"Following the previous instance after GE14, many civil servants were still scarred by the disappointment of having the previously announced incentives overlooked.

"We (Cuepacs) hope that the Prime Minister (Anwar) will consider maintaining all the incentives that were announced in Budget 2023 on October 7.

"We are confident that all Members of Parliament will support Anwar during the partial budget presentation session on Dec 19," said Adnan.

It was reported that Prime Minister Datuk Seri Anwar Ibrahim had announced that the government would present the budget to approve emoluments related to operating expenses, especially involving the salaries of civil servants.

Anwar explained that it was to ensure that there were no concerns for civil servants due to the Budget 2023 not being approved as yet. 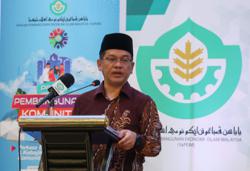