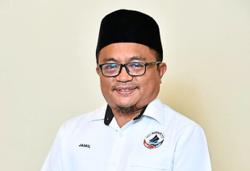 KOTA KINABALU: Jamil Hamzah from Parti Warisan was sworn in as the new Bugaya assemblyman at the Sabah State Legislative Assembly building here on Friday (Nov 25).

Jamil, who won by a 6,629-vote majority in the seven-cornered Bugaya by-election on Nov 19, took his oath before assembly Speaker Datuk Kadzim M Yahya before the tabling of the 2023 Sabah budget by Chief Minister Datuk Seri Hajiji Noor.

The by-election, which was held simultaneously with the 15th General Election, was called after incumbent assemblyman Manis Muka Darah, also of Warisan, died due to kidney complications on Nov 17, 2020.

The by-election was, however, postponed as a result of the Emergency declaration by the Federal Government to prevent the spread of Covid-19.

The successful defence of the Bugaya seat means that Warisan now has 19 seats in the 79-seat state assembly.