“If can, we would like to postpone it to consider several issues,” said Saravanan.

“The Umno secretary-general has informed the Palace on this,” added Saravanan.

The late night Barisan supreme council meeting at WTCKL has ended and MPs are remaining tight-lipped over the outcome of the meeting.

Sabah Umno chief Datuk Seri Bung Moktar Radin said there is a “cooling-off period” for MPs, and no decision was made by the coalition.

“We did discuss, but the decision is to cool down.

“Cool down from thinking, we have 30 MPs here, we shouldn’t make a fuss,” said the Kinabatangan MP.

“When it doesn’t happen, then it’s postponed,” said Hishammuddin.

“We will not support any pact to form the government,” said Chong briefly.

All 30 Barisan MPs have been summoned to the Istana Negara on Wednesday (Nov 23) morning and each MP will have an individual audience with the King, beginning 10.30am.

Muhyiddin leaves Palace without speaking to the media

GE15: BN informs King none of its MPs support Muhyiddin as 10th PM 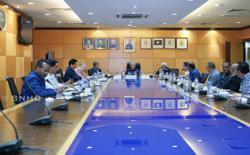