KUANTAN: Despite its best efforts, Pakatan Harapan failed to reclaim the Indera Mahkota parliamentary seat in the 15th General Election.

The all out, almost relentless, campaigning from the party's top brass to punish Datuk Seri Saifuddin Abdullah, labelled a "traitor" for winning the seat under the PKR ticket and then joining Bersatu, did nothing to unseat the incumbent.

Saifuddin won with 41,692 votes and a majority of 8,399 votes over Pakatan's hopeful Zuraidi Ismail.

Although he did not manage to wrest the seat away, Zuraidi said he was happy that the party got more votes this time than the last – he won 33,293 votes compared with the 28,578 that Saifuddin got when he won the seat in 2018.

In a post on his social media page, Zuraidi thanked the voters in the constituency who "have given me their full support, prayed and voted for me."

"I accept the results of the 15th General Election with an open heart. Although we lost, the support from voters increased from 28,000 to 33,000 this time.

"I have tried my best and accepted the results,” he said in the post.

Zuraidi pledged to remain steadfast and continue to "fight on" and work towards building a country free from corruption as well as work towards economic, education and political reforms for the betterment of all Malaysians.

"Thank you, all. Kita tetap boleh," he said, signing off with the party’s slogan.

In the winning corner, Saifuddin also posted a statement on his social media – a happier one – thanking God for his victory and the people for trusting him to continue his service in Indera Mahkota.

"I’d like to thank the people of Indera Mahkota who are always close to my heart. Not forgetting the young people who voted for the first time either.

"I'd like to also share this victory to the election machinery that has worked hard throughout the campaign. This is a mandate we must execute well," he said. 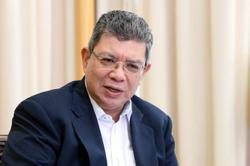