PETALING JAYA: Incidents of flooding were reported in several parts of Klang in Selangor following a downpour on Wednesday (Nov 9) afternoon.

A number of areas affected by flash floods include roads and residential areas in Bandar Botanic, Bandar Puteri and Taman Sentosa as well as parts of the Shah Alam Expressway (towards Klang).

The Department of Irrigation and Drainage had issued a warning at 4pm that several areas were at risk of flooding based on forecasts by the Malaysian Meteorological Department (MetMalaysia).

MetMalaysia’s weather report at 5pm stated that the formation of rain clouds and strong winds currently affecting various locations on the east and west coast of the peninsula could also lead to prolonged rainfall into the night.

“There is a risk of flooding at several localities if significant rainfall continues (within the next 12 hours).” 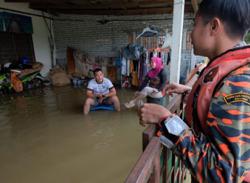