He mostly donates to mosques, surau, tahfiz centres as well as to the poor, orphans and single mothers, said his special officer Datuk Mohd Kamal Abdullah, 65.

“During the early days of YAB’s establishment, Ahmad Zahid would put his personal money in the foundation to channel it to the needy.

“His contribution was not only for Bagan Datuk and Melaka. It was nationwide and also abroad.

“The money came out of his own pocket or through YAB,” said Mohd Kamal, who was reading his witness statement.

Mohd Kamal, who is the sixth defence witness, testified that YAB contributed to the development of SM Imtiaz Ulul Al-Bab in Melaka.

It also contributed RM10mil for the construction of Masjid Salmah Khamis and Masjid Tuminah Hamidi in Bagan Datuk where both buildings were expected to be completed this month.

“I was told that the completion date for the buildings was delayed due to YAB’s accounts being frozen by the Malaysian Anti-Corruption Commission (MACC),” he added.

Meanwhile, Ahmad Zahid’s former senior private secretary Dr Sabri Zainudin Zainul, 61, testified that for as long as he had served the Umno president, there were many individuals who came to the former deputy prime minister’s office to seek funds to pursue their studies.

“Ahmad Zahid usually would give help in the form of cash,” Sabri said.

“But there was a time that he did not have any cash to give away,” he added.

According to the fifth defence witness, Ahmad Zahid would ask to use his (Sabri’s) money first to give it away for charity.

“He would reimburse me afterwards,” he added.

Sabri, who was reading his witness statement, also testified that Ahmad Zahid would give a personal donation to foot the bill for the Home Ministry’s family day celebration.

The trial became tense when deputy public prosecutor Datuk Raja Rozela Raja Toran rebuked the witness and told him not to treat the courtroom as a coffee shop.

The prosecutor was questioning the witness whether Ahmad Zahid had instructed his former executive secretary Mejar Mazlina Mazlan to use YAB funds to clear his credit card.

Sabri, however, did not give a direct answer despite being questioned repeatedly. 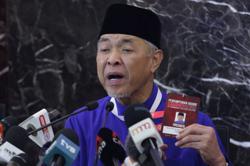