IPOH: Parti Sosialis Malaysia (PSM) is disappointed with Pakatan Harapan’s decision to reject an electoral pact with the party.

PSM’s deputy chairman S. Arutchelvan (pic) said they were informed through an official letter over the matter dated Sunday (Oct 30).

He said without a single seat given, they understand that Pakatan does not desire an electoral pact with PSM.

“We regret the matter being informed to us so late in-spite of a statement by PKR deputy president Rafizi Ramli that certain seats were allocated for PSM and Muda.

“PSM requested for an electoral pact with Pakatan because many felt that PSM should not stand alone but join a coalition,” he said in a statement.

Arutchelvan said they had put a minimum request that the party’s chairman Dr Michael Jeyakumar Devaraj be allowed to stand as he is the best and most winnable candidate for Sungai Siput.

He said they also gave two other alternate non-incumbent parliamentary seats held by Barisan Nasional if the Sungai Siput seat is denied as a worst-case scenario.

“We are disappointed that there was no serious effort made by Pakatan to hasten this process or find a way in-spite of numerous efforts on our part. “We want to tell our members and supporters that the pact is over but not the struggle. 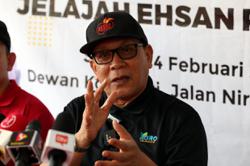