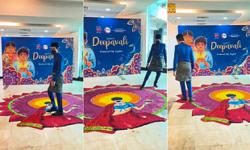 KLANG: A man allegedly seen destroying a Deepavali kolam on TikTok will be called in to the police station here on Monday (Oct 31).

In a statement, North Klang OCPD Asst Comm S. Vijaya Rao said the video of the incident had been circulating online on Saturday (Oct 29) that showed the man, allegedly a hospital staff member, purposely walking over the kolam at a hospital in Klang.

"In response, the Bandar Baru Klang police station chief filed a report regarding the video and the case is being investigated under Section 298A of the Penal Code with causing disharmony, disunity, or feelings of enmity, hatred or ill will.

"He will be called in to give his statement on Monday. We urge the public to be careful with their behaviour and to not do anything that would disrupt national harmony," he said.

The man's actions have drawn widespread anger and criticism online with many calling it rude and going against Malaysian values of racial harmony and tolerance.

"Even my three-year-old daughter knows to walk around a kolam. She says it is beautiful, not something to be vandalised.

"You should know better," said a member of the public online, according to mStar.

The Malay portal also reported that it was unable to locate the man's TikTok account, which is believed to have since been deactivated following the public uproar.

In a statement, KPJ Klang Specialist Hospital said that they had been informed of the video that allegedly depicted one of their staff members.

"KPJ Klang does not condone any act of disrespect among its staff within the compound of the hospital. We have launched an internal investigation into the video and stern actions will be taken should our staff is (found to be) involved."