Health director-general Tan Sri Dr Noor Hisham Abdullah said the increase made the cumulative number of dengue cases reported to date at 45,018 cases compared to 20,376 cases for the same period last year, which was an increase of 24,642 cases (120.9%).

He said the number of cumulative deaths rose 100% to 28 deaths due to reported complications from dengue compared to 14 deaths in the same period last year.

"A total of 53 hotspot areas were reported this week compared to 55 hotspot localities in the previous week with 31 hotspot areas in Selangor, 14 (Sabah) and eight (Kuala Lumpur and Putrajaya),” he said in a statement on Thursday (Oct 13).

Dr Noor Hisham said Chikungunya surveillance recorded three cases in the EW 40 with two cases in Selangor and one case in Kedah, making the cumulative cases to date at 652.

As for Zika surveillance, a total of 1,544 blood samples and 16 urine samples were taken with the results all negative.

Dr Noor Hisham said each individual should ensure that there are no water-retaining containers in the vicinity of their homes that could end up breeding Aedes mosquitoes and to also dispose worn-out or unused items at disposal sites in a safe and proper manner.

Therefore, he advised those affected by floods to conduct "search and destroy" activities to clear all Aedes mosquito breeding containers immediately after floodwaters recede.

This was because it was feared that the rubbish carried by the floodwaters could stagnate and become a breeding ground for Aedes mosquitoes, he also said. 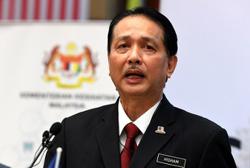