KUALA LUMPUR: The Yang di-Pertuan Agong made an official visit to the National Flood Forecasting and Warning Centre here, hours before the Prime Minister was due to have an audience with him.

Al-Sultan Abdullah Ri’ayatuddin Al-Mustafa Billah Shah was briefed on the forecast of the northeast monsoon and preparations for floods during his visit to the centre in Ampang at 10am.

The two-hour royal visit also included a briefing by Khairy on the current Covid-19 situation and preparations by the Health Ministry for the floods.

After the briefing, Tuan Ibrahim said the King was satisfied with the preparedness, but asked that there be more early warning systems and quicker assistance to those affected by the floods.

“His Majesty was satisfied with the preparedness level.

“He had requested for this briefing to see for himself the forecasting of the northeast monsoon by the Meteorological Department. Royal visit: The King being briefed on the preparations for floods at the centre in Ampang. With His Majesty are Tuan Ibrahim, Khairy and Mohd Zuki. — Bernama

“He asked that there be more focus on the early warning system. We informed His Majesty that we have increased the facilities for early warning system such as sirens and that we will make sure that assistance reaches the flood victims quicker,” said Tuan Ibrahim.

Khairy said the King was also informed of the current public health situation and health facilities.

“I have briefed him on the situation of the public health and the preparations of health facilities at flood evacuation centres.

“I also informed His Majesty on preparations at existing hospitals and clinics. He was satisfied with the preparedness level,” said Khairy.

Both ministers played down talks that the briefing had to do with a pending snap polls.

“His Majesty is very concerned for the people’s well-being,” said Khairy.

Talk of possible snap polls has been rife and it has been speculated that Prime Minister Datuk Seri Ismail Sabri Yaakob would advise the King to dissolve Parliament at the audience.

However, there have been many who feel that polls should not be held this year because of the impending floods. 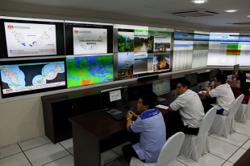