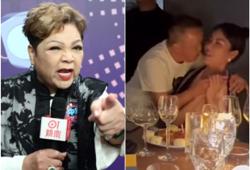 “Us Eurasians will kiss on the face twice or even three times. Eric only kissed once.

“It’s obviously rude; he should have kissed two more times,” she quipped.

A video of Tsang, 69, planting a kiss on the lips of 26-year-old Malaysian model Lebara during her birthday celebration recently has caused a stir after the latter posted it on her Instagram account.

Cordero, who shared an intense kiss with Tsang when they played lovers in the movie Men Suddenly in Black in 2003, brushed off accusations against her colleague, who is also a general manager of TVB.

“It’s not something worth mentioning. It was just a kiss and birthday wish.

“It’s very normal yet people are still harping on it,” she added.

Cordero, 68, said she suspected that Lebara was trying to ride on the publicity for fame.

“Eric is famous! In our line, any news – good or bad – is still great publicity.

“If I were her, I’d like to turn it into news as well or else no one would know me.

“I can feel Eric’s frustration of being used. People have been using him to get publicity for more than 20 years,” she said.

> A lovestruck teenager in China’s Sichuan province decided to make a 600km journey on foot just to meet his online girlfriend after he ran out of money for transportation.

China Press quoted local news reports as saying that the 18-year-old, whose surname is Wang, had met a woman via social media a week ago, and she invited him to meet up on Oct 1.

Wang then borrowed 800 yuan (RM520) from his grandfather to make the journey but travelled to the wrong county after getting off the bus.

Without much money left, the boy decided to walk the 587km from Jinchengzhen to Xiaojin county.

It’s a journey that takes over seven hours by car or an estimated 125 hours on foot.

A police patrol car spotted the guy pulling his suitcase along the Rongchang Expressway at 9am on Oct 3 and after learning about his situation, the officers felt that the woman could be a scam artist and advised him to go home but Wang refused.

Frustrated, the officers contacted Wang’s parents and they managed to convince their son to return home.