A file picture of Gunung Senyum. There are more than a hundred caves there, most off limits to visitors.

KUANTAN: The search and rescue operation mounted to locate a man said to have gone missing in the Gunung Senyum Recreational Forest in Temerloh near here, has been called off after it was deemed that the 'victim' does not exist.

Pahang Fire and Rescue Department public relations officer Zulfadli Zakaria said the operation was activated Thursday (Sept 29) evening after they were told that two people had gone missing in the forest.

A 29-year-old man, who has a record of mental illness, had contacted the emergency line at about 5pm Thursday claiming that he was lost.

He was found by the rescue team about three hours later.

"The victim was in a state of exhaustion and said he had to leave his equally exhausted friend behind in order to find help.

"However, efforts to locate the victim's 'friend', said to be in his 20s, failed.

"Initial investigations found that the victim suffers from a mental disorder and that his 'friend' does not exist," he said in a statement here on Friday (Sept 30). 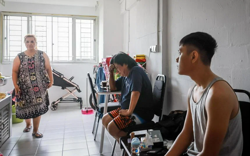