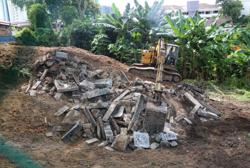 GEORGE TOWN: Pieces of tombstone from the 138-year-old grave belonging to Foo Teng Nyong (estimated 1816 to 1874) that was illegally demolished and found dumped in the Jelutong landfill will be kept in a museum.

Penang Heritage Commissioner Rosli Nor said while they will be preserved, there are no plans to rebuild the grave at the moment.

"We will keep the stones in the museum's storage, and in the future may use them for exhibition.

"I do not think there will be any repair or reconstruction of the grave at the time being.

"There will also be no reconstruction at the museum's compound," he said on Thursday (Sept 29).

Rosli said while it was possible for reconstruction, they were now focusing on documenting the grave.

"We have detailed images of the grave when we went there about three months ago.

"Reconstruction will still be possible, although there is no intention for it at the time being," he said.

As for the land, Rosli said while the owner could not do anything with it, the erection of buildings will not be possible without a setback of six metres (20ft) from the roadside.

He said any further action against the offender who violated rules when moving the grave would depend on Penang Island City Council (MBPP).

ALSO READ: Grave of powerful woman from the 1800s in peril from development

On Aug 28, the landowner had demolished the grave and buried Foo’s remains in an unmarked grave in Batu Gantung.

Pieces of the tombstone were found dumped at the Jelutong landfill.

This led to an uproar among heritage advocates, and they demanded that the tomb be reconstructed on its original site.

The Penang Island City Council has since issued a stop work order and would be taking legal action against the land owner for failing to meet the conditions of the demolition permit.

Teng Nyong was the third wife of Kapitan Chung Keng Kwee, who played a pivotal role in the growth of Penang and Perak in the 1800s.

Chung left such an impact on Penang's economy, public healthcare, education and social welfare that two streets were named after him: Keng Kwee Street, where tourists today enjoy Penang Teochew Cendol, and Ah Quee Street, which is the site of several iconic murals of the heritage enclave.

Teng Nyong gave birth to several sons and daughters, one of whom was Chung Thye Phin, who became a tycoon and philanthropist in George Town and Ipoh, Perak.

She is also recorded as the aunt of Foo Choo Choon, who at one time earned the moniker Tin Mining King of Malaya.

Grave of powerful woman from the 1800s in peril from development