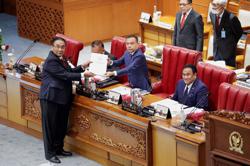 GEORGE TOWN: Cybersex blackmail scams are back and one such syndicate was crippled by the police with the arrest of 14 people from various states suspected of extorting 12 victims in Penang.

Using video calls, the scammers arouse their targets to the point that the targets strip and pleasure themselves during the calls, without knowing that the calls were being recorded.

The scammers then threaten to spread the lewd recordings of their victims unless they pay up.

Penang police chief Comm Datuk Mohd Shuhaily Mohd Zain said the victims were both women and men and that the syndicate was suspected to have blackmailed about RM69,000 from them.

The 14 cybersex blackmailers, aged between 23 and 60, were arrested in Johor, Perak, Selangor, Kuala Lumpur and Penang between Sept 16 and 19.

“The suspects detained were owners of bank accounts that the victims banked in money to.

“All the suspects have several prior criminal and drug-related offences,” he said yesterday.

Comm Mohd Shuhaily said the suspects had been remanded for a week to assist investigations under Section 384 of the Penal Code for extortion.

From January until August this year, Penang police have received 76 reports on these cases involving nearly RM307,000 in extortions.

“With the arrest of the suspects, we believe 12 cases of extortion have been solved in the state.

“Another 64 cases are still under investigation,” he said, adding that the suspects were also believed to be involved in 27 cases from Selangor, Kuala Lumpur, Pahang and Johor.