TENOM: A police officer assigned with seizing a handphone from a witness in preacher Ebit Irawan Ibrahim Lew or Ebit Lew's sexual harassment case did not check the contents on the device despite knowing the case was linked to the preacher.

ASP Salwani Mohd Hadzir, 40 told the Magistrate's Court here that even though she was informed the case involved Lew, she had no idea it was pertaining to sexual harassment.

"I was only informed by the investigating officer DSP Noor Ashikin Shamsuri that the case involved Ebit Lew," she told counsel Ram Singh during cross-examination at the preacher’s sexual harassment trial on Thursday (Sept 29).

However, Salwani said she had typed in Section 509 of the Penal Code on a set of three photographs of the handphone and SIM card that she seized from Mohd Fairuz Abu on Oct 5, 2021 at his house in Alor Setar.

Salwani, the Staff Officer of the Kedah Police Contingent Headquarters Criminal Investigation Department’s Women and Children Section, agreed with the defence counsel that when she seized the handphone from Mohd Fairuz, she knew it contained relevant matters with regards to a Tenom case.

Salwani testified further that said she had read news articles on the accused via social media before she went to Mohd Fairuz's house to seize his handphone.

During re-examination, the police officer said she did not inspect the contents of the seized phone as each case material is required to be sent to the Royal Malaysian Police Forensics Department for analysis.

On labeling the set of photographs of the seized handphone and SIM card with Section 509 of the Penal Code, Salwani said she typed it out when delivering the seized items to the investigating officer at Bukit Aman.

When asked by Deputy Public Prosecutor Nor Azizah Mohamad why Section 509 was typed out, the witness said it was because the investigation being carried out involved that section.

He told the court that the complainant in the case was among several sexual harassment victims to whom his NGO had extended assistance.

Lew, 37, faces 11 charges, including insulting the modesty of a woman in her 40s by sending obscene words to the victim's phone number via the WhatsApp application between March and June last year. 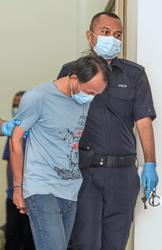 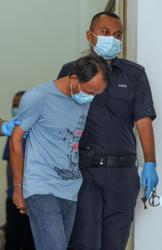