He said talks on mining the mineral started when Pakatan Harapan was governing the state.

“After becoming Mentri Besar, I just continued the process, and it is strange that they (the Opposition) are now making all sorts of accusations.

“Howard Lee Chuan How (Pasir Pinji assemblyman) who was a state executive council member at the time was aware of the project, but he is now saying that the mineral is radioactive.

“We have gone through all the necessary (procedures) to get clearance to mine the mineral, and it is not radioactive.

“We can have different views and ideologies, but inciting and telling lies is not acceptable,’’ he told reporters at the closing ceremony of the Perak Sejahtera 2030 Debate challenge held at the State Secretariat building here Wednesday (Sept 28).

On Tuesday (Sept 27), Lee had claimed during a roadshow in Kampung Manjoi that he was worried the project would have radioactivity-related complications like what happened in Bukit Merah in Menglembu in the 1980s.

Lee also questioned why there was so much secrecy over the project, and no engagement with the people, when it was billed as such a lucrative undertaking.

Saarani said an engagement session was held online at the end of last year, involving all the assemblymen both from the government and Opposition.

"I have no idea what Lee is talking about. The matter has (also) been debated in the state assembly.

“I have said many times that the method to mine the mineral is not like the conventional method of tin mining using a dredge. Also, no trees will be felled.

“For this project we are using modern methods. We drill a hole, put in aluminium sulphate for a reaction to take place, and extract the lanthanide,” he added.

Saarani said he would not proceed with the project if the mineral was radioactive.

“I have been a chemistry and physics teacher before, and I know for a fact that lanthanide is not radioactive.

“Perak needs an additional source of income to help the people and bring progress. If we don’t take on the project, others will,” he said.

Saarani had said on Monday that the pilot project could start at any time as the state executive council had already given approval.

Lanthanides are a series of rare-earth metals commonly used as catalysts in the manufacture of petroleum and synthetic products. 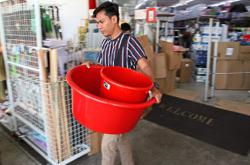 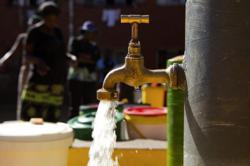