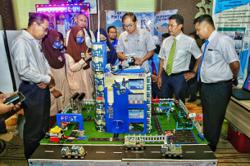 SUNGAI PETANI: The government is spending RM547mil on supplementary food and milk for about 800,000 pupils in the 2022/2023 academic year.

“After a few years of implementation, students grew accustomed to drinking fresh milk.

“The increase in (consumption of) fresh milk is a good indicator (of PSS’ success).”

A total of 789,828 pupils are benefiting from both programmes, he said after opening the World School Milk Day here yesterday.

Three major dairy companies – Farm Fresh, Dutch Lady Milk Industries, and Sabah International Dairies – are involved in PSS, which gives out 75 million packs of milk, or 90 packs per person, to eligible pupils from April 2022 to March 2023.

Dr Mah said an open tender system was used to ensure cost effectiveness so that the most suitable suppliers were awarded the PSS contract.

At the World School Milk Day organised by Fresh Farm, about 300 people, who were mainly pupils from various schools in Kedah, took part in various activities and performances.

The event was part of Farm Fresh’s nationwide tour to promote the benefits of milk consumption. At present, it is supplying milk to 390,000 pupils in 3,560 schools across nine states.

Farm Fresh Malaysia’s chief operation director, Azmi Zainal, said that since the company started delivering to the Education Ministry in 2014, it has tried to improve its delivery service and reach out to more people in need.

He said these programmes were timely as more families had been impacted economically by the Covid-19 pandemic.

“This is an easy way to provide the underprivileged with nutrition to grow and develop better,” he said. Also present at the event were Yayasan Didik Negara chief executive officer Hardian Harir and Kedah Education Department director Rozaini Ahmad.

Call for higher allocation to feed B40 students in Budget 2023