KOTA KINABALU: A fishing trawler owner was slapped with a fine for littering at sea in waters off the city here.

The trawler's crew was caught on camera by members of the public throwing garbage into the sea. Their act was later reported to Kota Kinabalu City Hall.

Mayor Datuk Noorliza Awang Alip said a member of the public was prepared to be a witness so that action could be taken against the trawler crew or the company owners.

However, the trawler owner admitted that it was a mistake by the crew to throw the litter into the sea, she said.

The company was compounded the maximum rate of RM500 under the Kota Kinabalu City By-law (Anti-Littering) 1983 Amendment 2005 for disposing of garbage from a ship into the sea.

Noorliza said City Hall often received complaints related to littering at sea committed by some members of the maritime community.

"We will intensify our operations to check on those who commit such offences," she said in thanking the public for playing a role in helping the council act against this offence.

She urged fishing boat owners to advise their employees not to dispose of rubbish at sea.

Kota Kinabalu City Hall constantly faced the challenge of cleaning up the city's shoreline with tonnes of rubbish, including plastics, washing ashore. 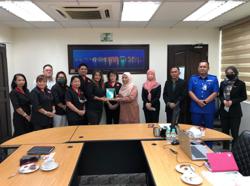