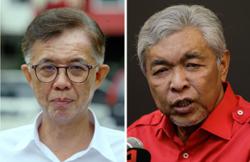 He said that the party's view on the matter is consistent, adding that the decision of the court should be respected if the court process is conducted in a fair and just manner.

Anwar added that although there are some disputes over cases, the public must admit and respect the court's decision.

The Port Dickson MP was commenting on a question by reporters on his take on the verdict by High Court judge Justice Mohd Yazid Mustafa that the prosecution had not succeeded in establishing a case against Ahmad Zahid.

"Whatever it is, PKR hopes that the Attorney General executed his duty to the best of his abilities," he said.

Ahmad Zahid was charged with 33 counts of receiving bribes amounting to S$13.56mil (RM44mil) from Ultra Kirana Sdn Bhd (UKSB) during his tenure as home minister to extend the company’s contract to continue operating the one-stop centre in China and the VLN.

Seven additional charges were also leveled against Ahmad Zahid for allegedly procuring for himself S$1.15mil, RM3mil, 15,000 Swiss francs and US$15,000 in his capacity as home minister.

He was accused of committing the acts between October 2014 and March 2018 at his private residence in Country Homes, Kajang, and his official residence in Putrajaya.

Asked about PKR's chances in the 15th General Elections (GE15) after officiating an event at the Kangar parliamentary service centre here, Anwar said thathe number of seats won by the Pakatan Harapan coalition has been increasing since 2008.

He said after making a breakthrough in 2008, the coalition won 52% of the votes in 2013 even though they failed to take over the government.

"In 2018, we won with more seats and gained 51 percent of popular votes by maintaining our performance. We have a positive chance," added Anwar. 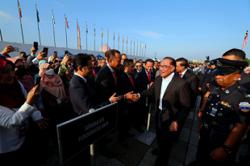