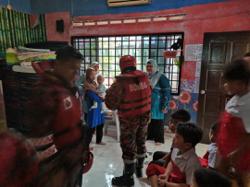 Flood victims in Pontian being relocated to a flood relief centre on Sunday (Sept 25). - pix from the Johor Civil Defence Force

“A total of 29 victims from 11 families from Kampung Seri Bengkal have temporarily been sent to Sekolah Agama Seri Bengkal for shelter while data for the SK Peserai flood relief centre is still being compiled,” it said in a statement.

In Pontian and Muar, strong winds blew the roofs off several houses.

“Those affected were houses in Kampung Sungai Naga, Ayer Baloi and Parit Haji Omar near Kampung Kayu Ara Pasong in Pontian as well as Kampung Parit Jamil and Sabak Awor in Muar.

“The floods were caused by heavy rain and high tides, which led to the waters rising quickly. But the floodwaters have started to recede in certain areas,” the statement read.