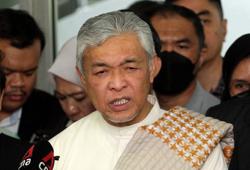 SHAH ALAM: Former deputy prime minister Datuk Seri Dr Ahmad Zahid Hamidi says he is grateful that he has been acquitted of all 40 graft charges in the Foreign Visa System (VLN) case.

The Umno president added that since the beginning of his trial, he was confident that the judge presiding over the case would scrutinise all legal aspects before making his decision.

On Friday (Sept 23), High Court judge Justice Mohd Yazid Mustafa held that the prosecution had failed to prove a prima facie case against Ahmad Zahid and made the order for a discharge and acquittal.

Ahmad Zahid also said his acquittal meant that he had never committed any of the allegations mentioned in his graft charges in the VLN case.

“I was shamed, accused and punished by the court of public opinion. But, god-willing, on a Friday, we saw that the law has been upheld for justice and I’m grateful,” the Bagan Datuk MP said.

Ahmad Zahid also thanked his team of lawyers, his family members, Umno leaders and supporters for being present.

He was accused of committing the acts between October 2014 and March 2018 in his private residence in Country Homes, Kajang and his official residence in Putrajaya.