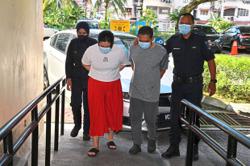 KUALA LUMPUR: A married couple was charged in the Ampang Sessions Court here Friday (Sept 23) with two counts of ill-treating their six-year-old niece and a seven-year-old nephew.

They were jointly charged with ill-treating the two kids, who are siblings, at their house at Apartment Bella Vista, Taman Cahaya Ampang, at 5.05pm between August and Sept 16, 2022.

They were allowed bail of RM10,000 with one surety each and also ordered to report themselves at the nearest police office, surrender their passports to the court and not to intimidate the victims and witnesses.