State Tourism, Culture and Environment Minister Datuk Jafry Ariffin said in the EIA submitted for the proposed project to the state Environmental Protection Department (EPD) on June 22, a sufficient buffer zone was provided between the beach area and the project site.

“This is to ensure that the beach area is maintained for the use and activities of the local residents,” he said.

Jafry was commenting about the project which has drawn protests and concerns from the villagers of Kampung Bangau.

The EPD, he said, had outlined in detail all relevant mitigation programmes in their letter of offer for the approval of the EIA report to the project proponent.

“The final approval for the EIA report will only be issued after the project proponent agrees to all the environmental conditions that have been stipulated,” he said.

“My ministry is concerned with the environmental issues expressed by the local residents, including their concerns about the project’s impact on Pantai Bangau.

Jafry also gave his assurance that he had asked the EPD to take into account environmental issues identified during the EIA assessment process following the application for approval.

The EIA report, he said, was discussed during the EIA Technical Committee Meeting with members from various technical agencies and relevant representatives of non-governmental organisations.

“Environmental issues that could occur as a result of the implementation of the project, as well as the proposed mitigation measures and monitoring programme were deliberated during the meeting,” he said.

The project has drawn concerns from the over 1,000 residents of five villages – Kampung Bangau, Andab Bangau, Andab Darat, Kimihang, and Longgom Kecil – who said that the proposed project would be detrimental to Bangau beach as well as the surrounding environment.

Mohd Mazza Azat, a member of the action committee formed by villagers to object to the initiative, was reported as saying that the villagers depended on the beach and the sea for their main source of income.

He said the beach is also considered one of the tourist gems of Kudat, located some 130km from capital.

“Pantai Bangau is one of the longest and most beautiful beaches in Sabah,” he said on concerns over the silica mining project which would include building a solar panel plant.

He claimed the residents were never asked for their views on the project or on how it would impact their lives. 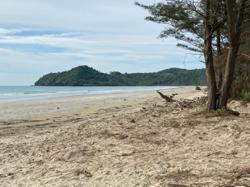